Cooperativa V. del Camp Sant Pere is in the municipality of Moixent in the Region of La Costera, located in the interior part of the province of Valencia, Spain. It is a Cooperative of only top-level producers, and bases its production on native olive groves of our region, more than 350 meters in altitude above sea level, yet still influenced by the Mediterranean Sea.

The main variety from which our oils come is called Grossal, a variety that only occurs in this region and can therefore be considered native to our area. The Grossal variety is complemented by Blanqueta, Picual and Arbequina plantings as well. The characteristics of our olive groves are fairly typical for mountainous plantings toward the interior of the land, with terraced layouts and extremely low production. Consequently, our commercial strategy is also driven by factors of micro-production and high specificity and quality for all our olive oils.

All the plots from which the olives come are controlled by the technical equipment of the mill. Including phytosanitary treatments, nutrition plans, and olive collection and transport, all is controlled by the obligation on the part of the producers to carry out a written record of these activities in order to ensure that the olives comply with the principles of development of the Cooperative. These principles are: respect for the environment, transparency, guarantee of origin, and quality development. 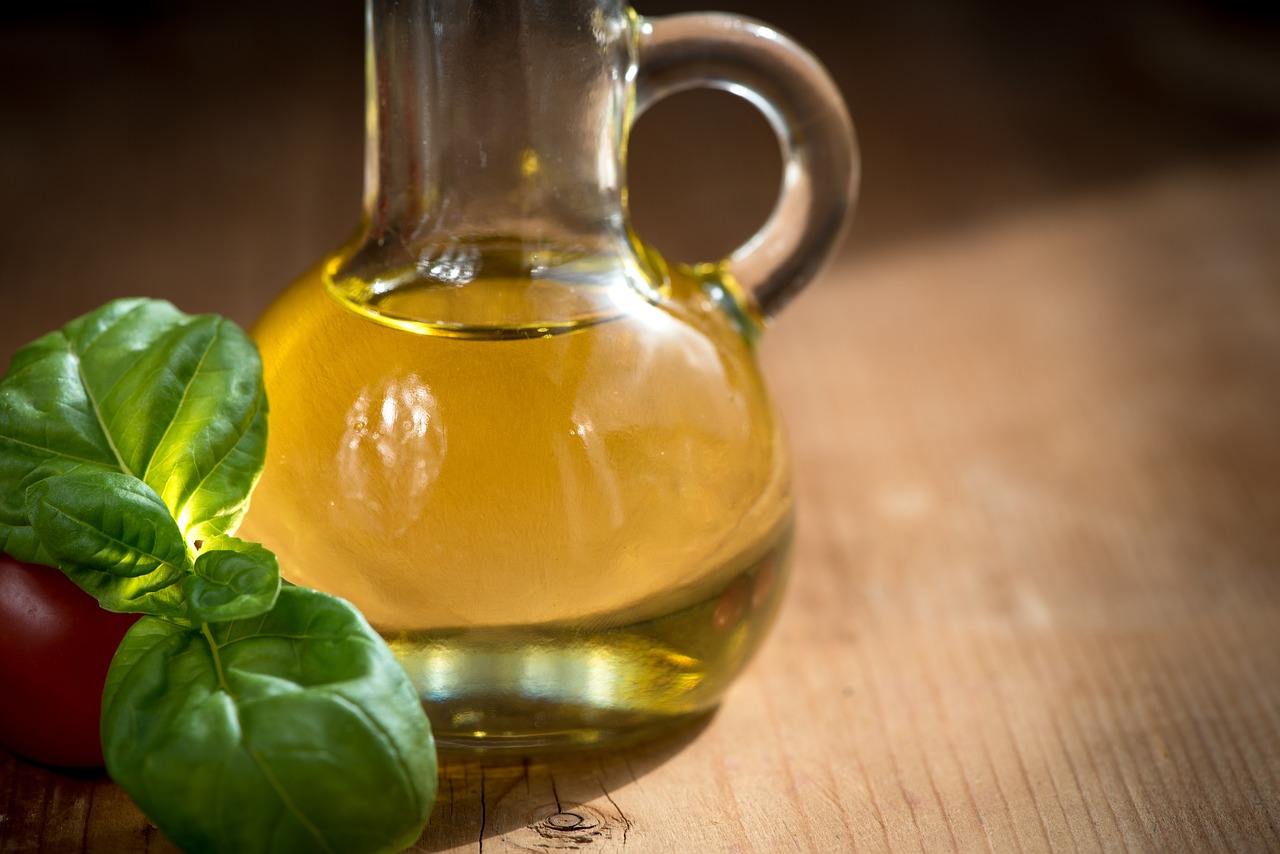 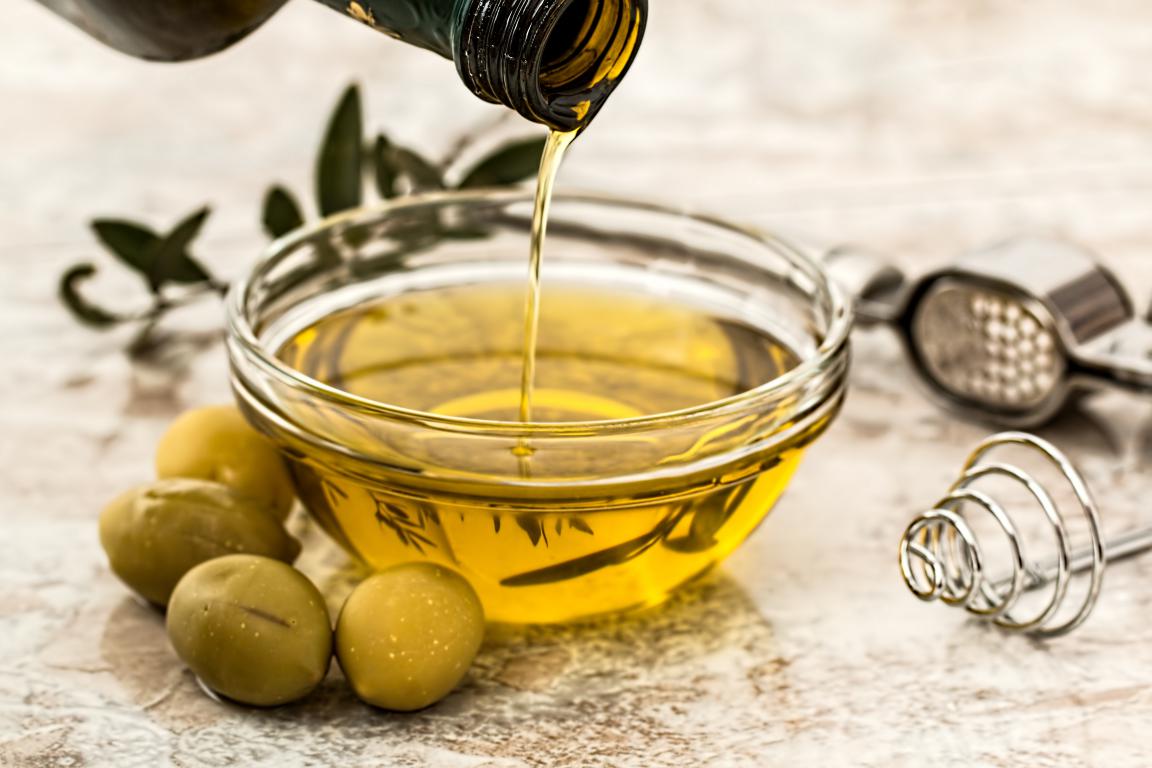 The elaboration process begins in the field with the control of the fruit before harvesting, for which extractions of olives are made as they mature, from which analyses of oil content and quality are performed. In this way we can determine the optimal harvest timing.

Once the time to start the harvest is determined, the partners that can start with it are notified. All olive producing partners are given campaign rules in which conditions are stipulated for how the olives must be delivered and the optimum “maturity index” to start harvesting the plots.

Within the Extra Virgin Olive Oils, the flagship product of the San Pedro Apóstol de Moixent Cooperative is marketed under the brand ” PAGOS DEL GUERRER”, made only with the primary and most representative olive variety of the Moixent municipality: “ LA GROSSAL “. It is a variety synonymous with the Alfafara, but adapted to the environment and terroir of the municipality of Moixent, having medium-high vigor and high production, although a slow processing time for production. It produces fruits of great size and of ovoidal and asymmetric form, with appeal also for table olive consumption. Its oil has a high content of polyphenols and chlorophyll pigments, making it especially interesting for health benefits.

The EVOO “ PAGOS DEL GUERRER”  is protected by the Designation of Origin Oils of the Valencia Community, a seal that certifies the high quality of this High Range of EVOO.

Its elaboration begins with the sanitary, nutrition and maturation control in the field, selecting plots that present the best conditions in these respects and can guarantee us an elaboration in accordance with the quality control requirements established for the PAGOS  DEL GUERRER EVOO.   In mid-October the olives are collected by fruit-friendly systems: mainly milking and mechanical vibrators, they are deposited for transfer to the oil mill in plastic boxes of about 20 kg. of capacity, free of branches and foreign matter.  No fruit harvesting that shows signs of external damage due to climate or damage caused by pests or diseases is allowed. Only olives that are intact and undamaged, and that have the appropriate maturity index, will be used for the elaboration of the EVOO “ PAGOS DE GUERRER”.  Those that do not have these characteristics are rejected and used for other types of extraction.

Once the olives are delivered to the mill they are cleaned of leaves and stems. They are then weighed and the milling is immediately carried out, with the aim that no more than 6 hours passes between the harvest and the time they enter the mill for crushing,. 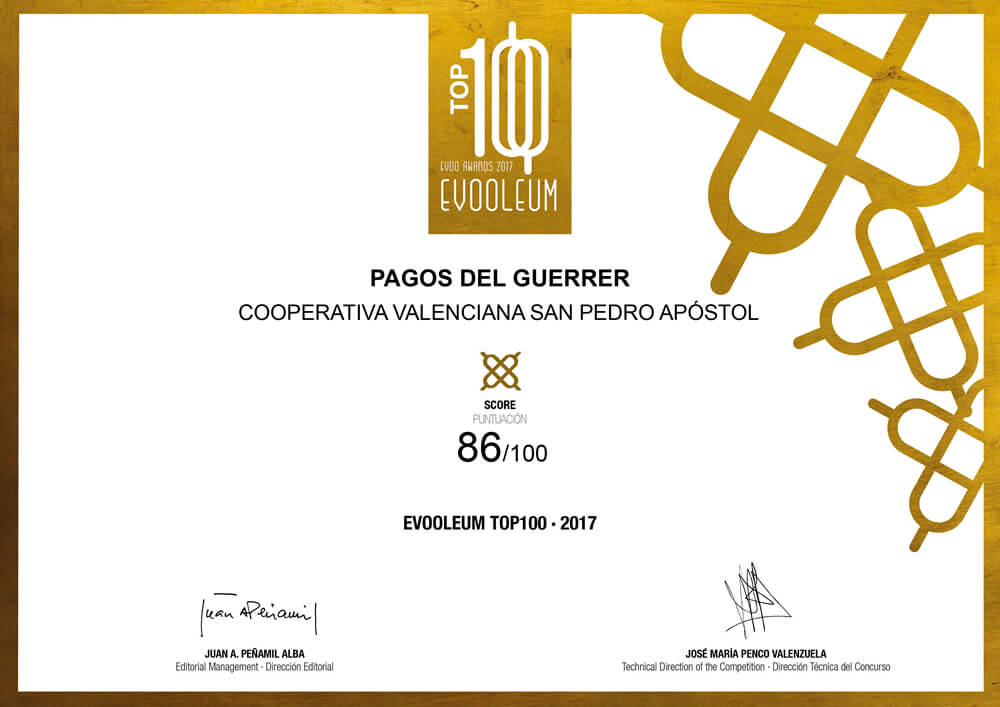 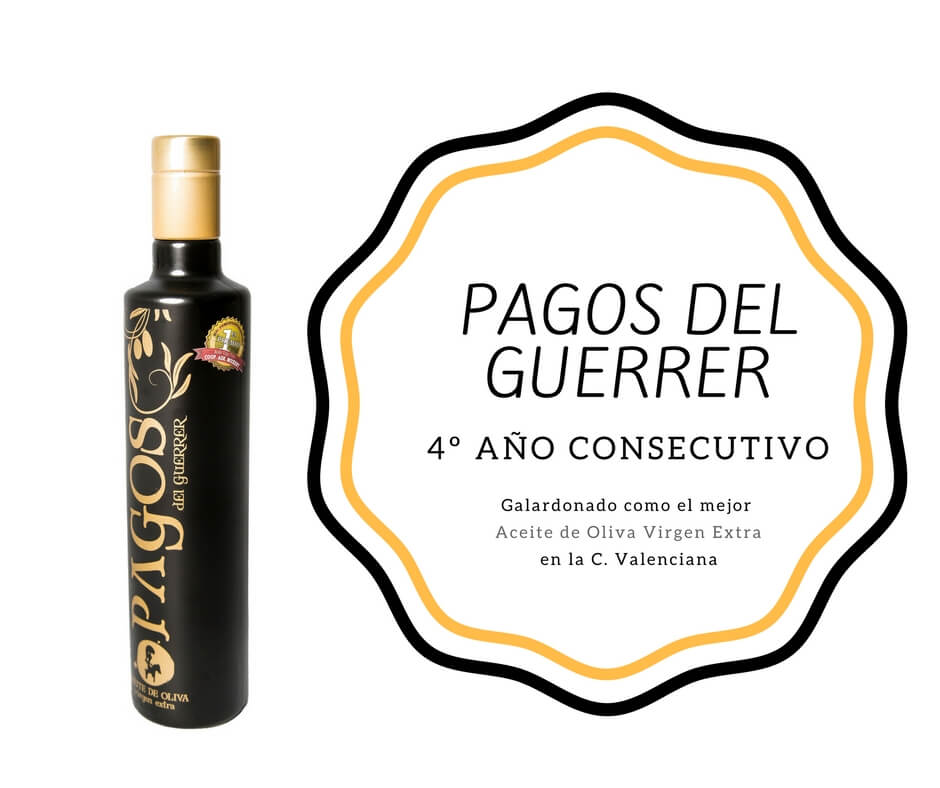 The oil mill has two oil extraction lines: one of 100 tons per day and another of 40 tons. Both use a continuous 2-phase system for the production of oils, that is, without the addition of water.

Already in the extraction process the olives are crushed in a stainless-steel hammer mill. Its great milling capacity prevents them from getting hot due to the friction of the pulp and bone. The paste resulting from the milling is then lifted into a mixer where blades spin the paste for about 35 minutes at a temperature of 20º C .

Once the oil line has been formed in the blender, the paste passes to a horizontal centrifuge or decanter, where the oil is separated from the pulp: i.e. the water containing the olives and the bones. This oil is deposited in a vibrating screen, which is responsible for removing pulp debris that may still be diluted in the oil.

The separated paste is called “alperujo.” This is considered as a byproduct and is withdrawn from the Cooperative by authorized extractors or operators.

The oil passes to another phase called liquid separation or vertical centrifugation. In this phase the oil is centrifuged and cleaned of moisture and impurities it may carry. Once clean, it is elevated to the “nursing” storage tanks where it will rest for the next 48 hours at a temperature of 20º.

Subsequently, it will be filtered immediately and pumped to the storage tanks where it will remain until its subsequent packaging.

Each deposit receives a coding, and a sample of each deposit is sent to an accredited laboratory to control the physical-chemical and organoleptic quality of the oil. In this way we control and certify the quality of all olive oils made in the oil mill to properly use each item.

The entire extraction system is constructed of high-quality stainless steel. In this way we ensure there is no possibility of taint by metals or any other substance into the olive oil.

The mill has implemented the HACCP and Traceability system, which ensures that the process complies with the principles of food safety required by official agencies, both sanitary, DO and agricultural.

All our auxiliary material suppliers are authorized suppliers, and the products they supply to us are subject to the requirements for food products.

packages by the same system, extra virgin olive oil with the ARGOLÍ brand, which is also sealed with the Valencia DO.

The Cooperativa San Pedro Apóstol De Moixent, certifies the origin of all its oils, guaranteeing that they come from olive trees grown in the lands of the Coastal Region, in the municipality of Moixent, located in the interior terrains of the province of Valencia ( SPAIN).

Do you have any questions? Please contact us and we’ll be happy to assist.

Find out more or adjust your settings.

This website uses cookies so that we can provide you with the best user experience possible. Cookie information is stored in your browser and performs functions such as recognising you when you return to our website and helping our team to understand which sections of the website you find most interesting and useful.

Strictly Necessary Cookie should be enabled at all times so that we can save your preferences for cookie settings.

If you disable this cookie, we will not be able to save your preferences. This means that every time you visit this website you will need to enable or disable cookies again.

This website uses Google Analytics to collect anonymous information such as the number of visitors to the site, and the most popular pages.

Please enable Strictly Necessary Cookies first so that we can save your preferences!